Totally unrealistic goal for 2014: read all the books I bought but haven't read yet (there are a lot of them!)

I also have a lot of books I’ve purchased and barely cracked the binding. This is an awesome goal to shoot for so I started thinking about how I would do it, here are my thoughts.

These aren’t separated out but they warrant talking about. These books have been raised to such a level through fame and infamy that I’m scared to touch them. GEB and SICP and are firmly in this category for me. So is The Annotated Turing, even though Charles Petzold is a great writer (go read Code), then chapter two starts talking about transcendental numbers and degrees of infinity my long seated math fear comes to the surface.

I need to get over this fear and dive into one of them. If you’re in the Philadelphia area the Clojadelphia user group is starting a SICP study group set to meet Febuary 5th. 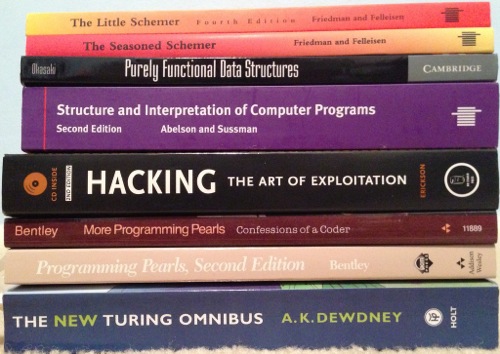 This pile mainly consist of books that I need to do projects and exercises along with reading the content to really learn. 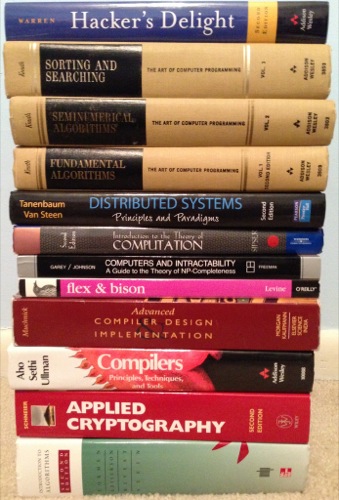 I will probably never read these books straight through but it would be good to skim through so I know what is in them so I can use them more effectively.1 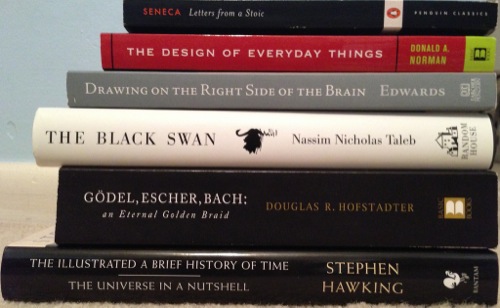 This stack is mostly about reading outside my field though somewhat tangentially. I tried to start the Black Swan a while back but couldn’t get into it. I also got about half way through GEB on vacation one year but got pretty lost when I picked it up again a few months later.

Here’s my attempt to get better organized and learn more about project management. I’ve read through David Allen’s Getting Things Done several times but I can always read it again. It’s packed full of useful information and you don’t have to take the whole system as written, you can start using some parts and go from there. 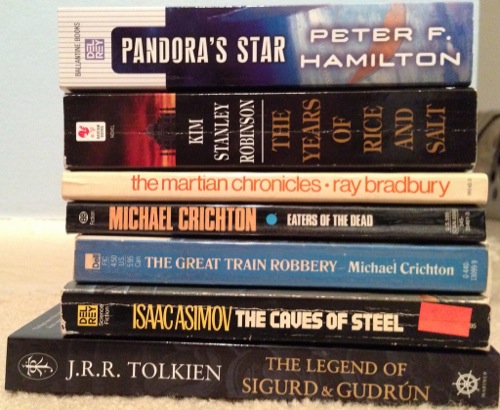 I’m actually surprised that this stack is so short. I really thought I had way more fiction books in the physical / already bought queue (not shown here: Catch 22). 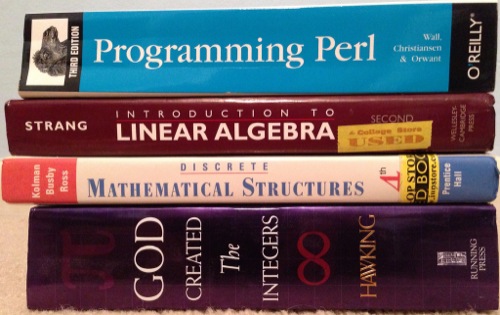 Here are a few math books I’ve meant to read. I used a fair bit of linear algebra in my masters program even though I sucked at it in my under grad days. Discrete math always seemed the most relevant but this class was during a too-many-credits-in-one-semester haze so I’d love to work through it again.

The Hawking book was a random purchase and while I’ve skimmed it I can’t say I’ll ever read it cover to cover.

And then there’s Perl. It’s not in the reference category because i just don’t do perl anymore though it was the first programming language I fell in love with. I can’t get rid of this book2 because I spent so much time in this book. 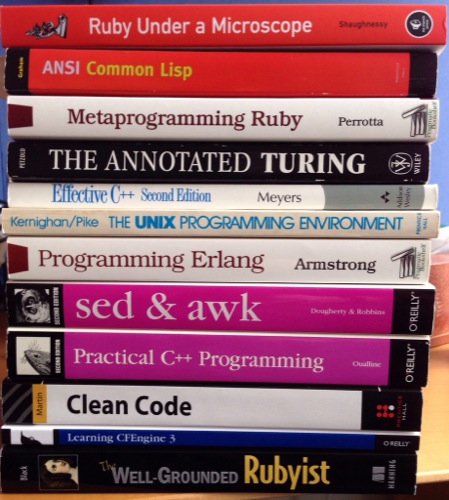 I used to have almost all my books at work at my last company and almost never used them. This is the subset I decided to take in or work bought for me. I think they pretty much match up with the categories I already setup.

I think the goal is still achievable, especially if you consider not reading the reference stack though the Project books would be a bit intense to work through in a single year.

Also, I think Fogus’ Reading for the Rushed also applies to all of these books. If I don’t find Black Swan interesting I should probably just donate it instead of suffering through it, for example.